Whether a group of teenagers trying to escape a crazed killer, a gang of bank robbers trying to score big, or some kids trying to cheat a math test, all of them are tempting fate.

Tempting Fate is a rules-lite tabletop role-playing game that can be enjoyed by
1-4 players and 1 narrator. The game may be enjoyed without a narrator or even solo should that be desired as well. While Tempting Fate is best suited for horror narratives, it supports any story that has high stakes where the players face major consequences if anything goes wrong (expulsion, arrest, insanity, or even death).

What's in the Box?

Included is a short 17 page rulebook which houses the rules and 9 playbooks for players. There are no scenarios or settings included in this rulebook, but some ideas are offered to get you started. The rules are simple and easy to understand, fitting on about 7 pages.  The rest of the document being devoted to the playbooks which act as rules references and character sheets for the players.

In order to play Tempting Fate you will need a standard deck of 52 playing cards with both jokers, some tokens (several six-sided dice will work just as well), and this rulebook. Of course, you may want to invite a friend or two to play with you as well ;)

What's the Cost (Spoilers, it's FREE)?

Since this game was created during my Covid-19 social distancing, and in under a 24 hour period, I am making this free for anybody who would like it. I created this partially as a challenge to myself but also as something to enjoy with those I am cooped up with during this time. As a result, there may be some rough edges but I will update the document with refinements as I receive feedback. This is my second tabletop game design so I hope you will enjoy it. Finally, I do still ask you consider a small donation, especially if you enjoy the game. A lot of time and energy went into this, so I would appreciate it! That said, please don't feel obligated.

For this project I drew inspiration from the following titles:

Once you explore the system, it will be abundantly clear that I wanted to capture the feeling of Dread's gameplay loop but keep the interactivity and simplicity of Grin. However, I thought there was a lot of room to add a bit more depth by adding playbooks to the mix (an idea I got from Beyond the Wall) and mixing some of the core ideas in Grin up. Naturally, I've been playing loads of TRPG's across the years so my instincts and experience as both a GM and player went into this title.

This game was written and created by Nathan Mehlhorn in association with Jon Spencer Reviews.

Thank you so much for checking out Tempting Fate, I hope you enjoy it! Be sure to rate and share. If you have any feedback on the game, I gladly welcome it, though I ask you keep it as constructive as possible. Saying, "Great game!" or, "I really hated it!" doesn't tell me much about what I did well or not.

Lastly, I plan to support the game further so your feedback will help me to continue to evolve the game and make it even better! If you provide a really great suggestion, I'll give you a credit right here on the page and in the book itself. I may create some scenario books for a better guided play experience or additional playbooks, but that's not something I'm actively exploring at this time. 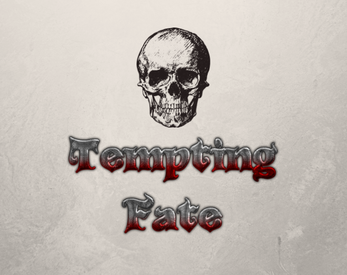