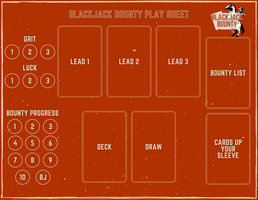 I'm back at it again folks with another game for you to try. In this devlog I'll be talking about what the game is and exactly how it came into being. I hope you will enjoyed the detailed explanation, as well as the game. Thank you in advance to those who decide to give this a go.

You swore that you’d never return to that life ever again, but here you are. Forced between a rock and a hard place, either you hunt down the list of bounties placed in front of you or you’ll have one more hole in that ol’ head of yours when they lay you down for a dirt nap. Your past has finally caught up with you, and you can’t help wonder, has your luck finally run out?

Blackjack Bounty is a solitaire card game that uses Blackjack, or 21, as a base. In the course of the game you must hunt down several bounties or die trying. You’re an experienced bounty hunter though, and you still have a few tricks up your sleeve. That said, it still may not be enough, but if you’re lucky, you can finally return to the peaceful life you’ve almost gotten used to.

To win the game, simply capture all bounties by playing enough cards or by making enough 21’s (Blackjacks) without going over (busting). It may sound simple, but it’s actually quite tricky!

What's in the Box?

Depending on if you download the full color version or the stripped down black and white version, you are getting a rulebook approximately 15 pages long. The rules fit on about 4 of those pages with the rest being dedicated to a detailed play example, optional variants (including a scrapped beta version of the game), and a full glossary of every keyword in the entire document. Additionally, the PDF has built in bookmarks for easy navigation.

As a separate document you can optionally download play sheets (color and B&W as a single PDF) which allow for easily tracking your skills using a coin as well as setup guides for how the cards should be positioned at game start. This is completely supplemental and therefore not included in the primary document.

To play Blackjack Bounty you need the following:

Unlike my previous games, this comes with a cost of $5 USD*. I had more people than usual willing to playtest this and provide detailed feedback on both the game's feel and potential pricing. All participants suggested a higher retail cost than what I ultimately settled on. Coupled with my own research, I've found that there really isn't anything like this out there, a game built around Blackjack that isn't just Blackjack, and looking at similar products on this website, I've concluded this is more than a fair price point.

With all that said, if you can't afford the game for some reason please contact me. I am very understanding and more than happy to give out copies to folks who are facing financial hardships (no questions asked). Additionally, every sale of the game will create a free community copy that can be claimed by anyone (it's yours to keep forever). Last, but certainly not least, the first 20 people to try the game will receive a free copy via the community copy section if they so choose. If you claim such a copy, all I ask is that you leave a comment/review along with a rating on this page.

*Patrons at my $5 tier receive this game for free and contribute one community copy to the pool automatically. There is no need for you to do anything as I will email you the game free of charge.

Recently I had a conversation with one of my friends who also happens to dabble in game development about an idea for a dueling role-playing video game that centered on the mechanics of Blackjack similar to something like Puzzle Quest. However, he was struggling to see exactly how my idea would work given we were basically talking over the phone. That got the ol' gears turning and I decided to create a solo experience that acted as a "prototype" of sorts for that while still being its own thing, and fun in its own right. Thus Blackjack Bounty was born!

When it came to the design process for Blackjack Bounty, it underwent more revisions than any other game I've designed to date. The initial design period was held in 24 hours, followed by several days of external playtesting and feedback collection which resulted in several edits that made it to the final version. In total, the game saw about 5 transformative changes as a result. Thanks to folks being more willing to help out than with my other games, I am confident in the final quality of the product as a result.

Back when this project was initially started, the game looked very different. In fact, the only things that remained constant throughout the design process was the game's title and the luck mechanic. The first 6 hours or so was me fiddling with a lot of different directions mechanics and interactions could go in. What felt right? Game length? And many more questions that I asked myself.

Let's look at an early build.

In the first version of the game, which was the most broken, you were playing with Jokers in the deck, always had 3 leads, cards up your sleeve was even MORE powerful, and the result was kind of a mess. First of all, the game was just way too easy under this current version but also overly complex. Not to mention I tried forcing another skill into the mix, originally I had one for each suit, and the names of these skills were more forced/pretty bad.

Sometimes less is more, here's what I'm talking about:

Instead I converted these down and settled on the following:

Beyond that, I also elected to change the bounty list that represents each bounty that needs to be caught from a ramping difficulty curve to a completely variable one. It kept an element of surprise this way and ended up being more fun as a result even if the game is "less fair" because of it. Rarely this can result in a game that's too easy, but most of the time the experience is fairly average with a slight weight to games being somewhat difficult. That's pretty much the design sweet spot for something like this.

The next revisions saw me playing  with the starting values for the 4 skills I settled on above. Ultimately I went with a stat array similar to what I've used in other past games. It forces the player to make a meaningful choice right at the start of the game where they have to sacrifice some advantages for others knowing they have the opportunity to earn more advantages, including the ones they missed out on, through the course of play.

Perhaps the biggest change was in the "Cards up Your Sleeve" mechanic. Originally, you swapped your draw with the card from this place when you wanted to play a card from here. It was too powerful and meant you were always building this pool with essentially zero cost to yourself. I also found this to be more boring than anticipated, but I took it back to the drawing board and by Version 4 had it in a good spot (the finalized mechanic).

Lastly, by this point I had completely removed the Jokers and revamped the Bounty Rewards once a player completed a bounty. The second change here was actually the more meaningful one, even if it was the smaller of the two. Getting this right is what finally let everything else fall properly into place.

At this point the game was more-or-less finished. Just a few little tweaks from last time to now, of which I hardly even remember what they were. I shipped this out for playtesting and edits because I had spent the previous 24 hours playing the game a ton and writing up the document (not to mention art, prep for release here, etc...). It needed some fresh eyes on the project. To my surprise, the game got more attention than normal and the feedback was overwhelmingly positive! This is always great news as a designer.

However, there were some bits in the rulebook that needed to be reworked. This was a bulk of my edits in Version 4. The game itself was pretty much good to go, but getting the rulebook to a good spot is always a challenge, though obviously very important. Folks read, played, and provided feedback in a vacuum without any input from me during the process. They could ask me questions after they were done, for clarity, but not while playing. Additionally, I prompted each person with specific questions regarding various aspects of the game to consider while playing and after the fact. This resulted in more pointed feedback that greatly increased the game's quality.

One such example is the play sheet. This did not exist when things started out. I had thought about it, but never made one. A tester suggested it, and after some more asking on my part, I opted to add it to the final product. This is the biggest change outside of rulebook edits in Version 4.

Well the rest is history after that! The final product is the direct result of all this effort and something I'm quite happy with. I hope you'll give it a look and let me know what you think.

Has Your Luck Finally Run Out?